The Story of César Chávez 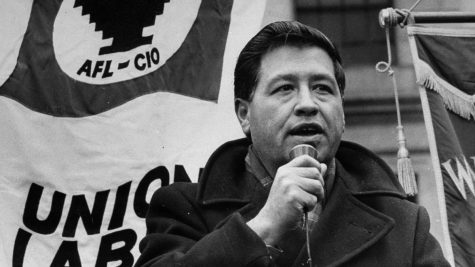 César Chávez died in 1993; however, his legacy lives on to this very day. His contribution to Latino Americans and workers in general earned him numerous recognitions and awards. A painting of him is on display in the National Portrait Gallery in Washington D.C. He accumulated a total of three Nobel Peace Prize nominations. He won the Jefferson Award for Greatest Public Service Benefiting the Disadvantaged in 1973. Chávez was presented with the Pacem in Terris Award in 1992, which is a Catholic award that honored him for his “achievements in peace and justice.” In 1994, President Bill Clinton awarded César Chávez with the Presidential Medal of Freedom. In 2006, he was inducted into the California Hall of Fame by Governor Arnold Schwarzenegger. These awards are only some of the many he has won in his lifetime. He has several buildings, streets, schools, parks, libraries, and university buildings named after him. César Chávez day is celebrated in the United States on his birthday of March 31 every year.

César Chávez was born on March 31, 1927 in Yuma, Arizona to a poor Mexican-American family of six children. He grew up in a small home. After times got rough during the Great Depression, his father had to sell much of his land and possessions. Eventually, they moved to California to become farm workers. As a teenager, Chávez helped other farm workers by driving them to the hospital. He did not like that his mother had to work on the fields as a farm worker, so he quit schooling altogether in seventh grade and became a full-time worker. As a last resort, Chávez joined the U.S. Navy in hopes of gaining more opportunities for success. However, this was not the case as he described his stint in the Navy as the “two worst years of [his] life.”

In 1952, Chávez stopped working on the fields because he became an organizer for the Community Service Organization (CSO), a Latino civil rights group. He urged Mexican Americans to register to vote and gave speeches on workers’ rights, and he became the CSO’s director in 1958. Chávez co-founded the National Farm Workers Association (NFWA), which was later called the United Farm Workers (UFW). He led strikes, marches, protests, and boycotts. In particular, the famous grape and lettuce boycott greatly impacted the nation at the time.

César Chávez advocated for civil disobedience and nonviolent action against injustice. His goal was to get better working conditions for workers who toiled on the fields for very low wages and under harsh conditions. He advocated against the Bracero program, which exploited immigrant workers and took jobs away from Americans. Thanks to his activism, he succeeded in having legislation passed to help migrant workers.