Taking a Stand by not Standing 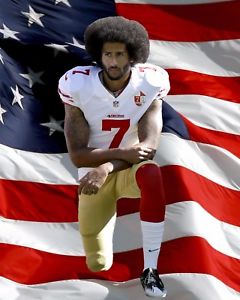 Kaepernick kneels for the national anthem.

Over the last few years, the biggest controversy of the NFL has been on the subject of kneeling. There are many views on whether or not players must stand for the National Anthem. Though Kaepernick has publicly stated that his kneeling is not to shame the flag, but instead bring awareness to the discrimination and inequality the United States still faces, it still causes tension. Just this year, the NFL proposed a ban on kneeling and would allow organizations to suspend players. Many people were upset with this, and the ban was not passed. It would be unconstitutional, going against the first amendment.

The recent Nike Ad has ignited a lot of speculation. Nike supported Kaepernick in a commercial, making him the face of the company’s 30th anniversary of the “Just Do It” campaign. In the commercial Kaepernick talks about some of the company’s sponsored athletes and their inspirational journeys to stardom. The purpose is to motivate younger athletes to achieve anything they want. The biggest part of the commercial is Kaepernick’s quote “Believe in something. Even if it means sacrificing everything.” These words brings light to his life and all he has dealt with. A couple years ago he was a top quarterback playing for a super bowl, today he has become one of the most criticized athletes of all time.

Complaints about the ad have led to many people boycotting the brand. Videos have surfaced of people burning, destroying, and altering Nike’s apparel. Donald Trump publicly stated his opinion on the matter, tweeting “What was Nike thinking?” Initially, Nike’s stock dropped; however after ten days it reached a new high at $83.47 and online sales doubled from last year.

Criticizing and questioning Kaepernick’s beliefs and actions without acknowledging his reason is highly ignorant. There is clearly a problem with equality in the US and it is time for change. People have to be open to several different views in order to get somewhere. One man did. At first, US Army Veteran Nate Boyer was disgusted with Kaepernick’s sitting down for the anthem. He then took it upon himself to evaluate his point of view. He reached out to Colin to seek understanding. Boyle wanted to appease both sides. He recommended kneeling instead of sitting to show respect to fallen soldiers. Kaepernick was very open-minded and took his advice. Many other veterans have stepped forward to show their support. If they can see the good in his beliefs then everyone should.