DeMatha athletes come from all over the DMV area 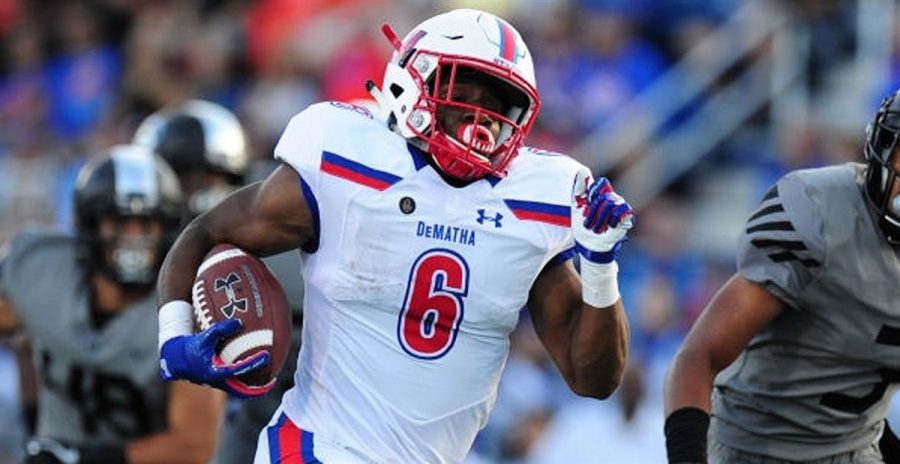 Junior Marshawn Lloyd breaks free as he rushes down the field.

DeMatha is often referred to as a powerhouse in multiple sports including basketball and football, and for good reason. Because of this status, the Stags often attracts top athletes from far and wide outside of D.C. and Maryland.

Two of DeMatha’s top football players hail from Delaware, junior running back Marshawn Lloyd and freshman safety B.J. Blake. “I first met Marshawn during youth football; we played against each other,” says Blake. Both live in Maryland during the week but go back to Delaware for the weekends. “The commute is around an hour and a half,” says Lloyd. “Up in Delaware there is a lot of farm land but down here there are a lot of things to do and see,” Says Lloyd.

Junior tackle Dwayne Alleck comes from Connecticut. “I first met Coach Brooks in 8th grade at the Under Armor game,” recalls Alleck. Like the two players from Delaware, he stays in Maryland during the week and returns to Connecticut on certain weekends and holidays. “It takes five to seven hours each way,” says Alleck. One of the major differences between Maryland and Connecticut is “the difference in music and the way they talk” according to Alleck.

DeMatha also has football players that come from Virginia. Senior lineman Khaydon Brooks, sophomore quarterback Ryan Cammas. None of the Virginia students started their high school careers at DeMatha, Cammas transferring in for his sophomore season, Brooks his junior season. Quarterback Ryan Cammas hails from Gainesville, Virginia and has a daily “one and a half hour commute on a good day.” He first met Coach Brooks and the rest of the staff when he attended a youth combine for future DeMatha Players. He started as the varsity quarterback as a freshman at his old school and performed well enough to be brought into the DeMatha system. Senior lineman Khaydon Brooks comes from outside of Richmond, Virginia, and has a commute of two and a half hours to visit his family in Richmond. Brooks moved up from Richmond into D.C. in order to be closer to DeMatha.

I have my own experience traveling from out of state to DeMatha. All WCAC schools look for students out of state and I was fortunate enough to have my choice of schools to choose from, ultimately choosing DeMatha. I live in McLean Virginia and have around an hour long commute.

DeMatha is an amazing school both athletically and academically, attracting top students and athletes from all around.