The DeMatha track team are determined to achieve their goals 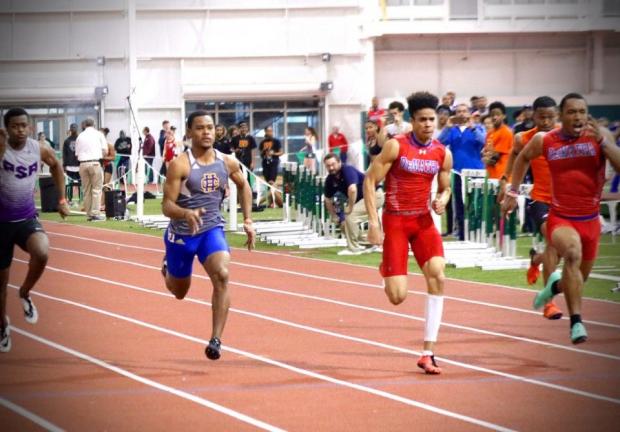 The DeMatha track team leaves everyone in the dust.

When asked about the change in leadership, 200m runner Manassa commented “It gives the class of 2019 seniors a chance to step up and become leaders like the class of 2018 was to us last year. I also believe that if we are successful with leading this team, pushing everyone to work harder, that we can get another ring for outdoor and get the indoor trophy as well. 4x200m runner Damon Green added, “I’m ready to take the role and to lead the team. I’ve been on big stages my whole career at DeMatha so I know what it takes to lead the younger guys. The process is long but you just have to have trust it to run your personal best.”

Many Dematha students get somewhat intimidated because of the effort that the sport requires whether it is in practice or at meets, so they often avoid the sport. When asked about the process of getting prepared for the season, 400m runner, Hood said,” Don’t be scared to run because with hard work comes great life changing results.”

Hurdles runner Dean reflects on the team’s contending chances,”I feel like our chances of contending are very high, we have a lot of depth in many events and I feel like our team is way better than we were last year.” Triple jumper Blanc answered the same question “It feels good; I found what I had potential in and fit into. The coaches gave me a shot and I took it and made the most out of it. I know I haven’t reached my fullest but this season, its show time.

Besting opposing schools and dominating track meets wherever they went, DeMatha’s Track team had made a name for themselves in the WCAC’s 2017-2018 season, winning the championship.

The runners were able to develop team chemistry and work together to achieve the ultimate goal of the team. They put forth the effort and hard work during the off season and during practices to win the WCAC Championship and they are set on doing the same this upcoming year.