How the Ukraine-Russia conflict has affected soccer 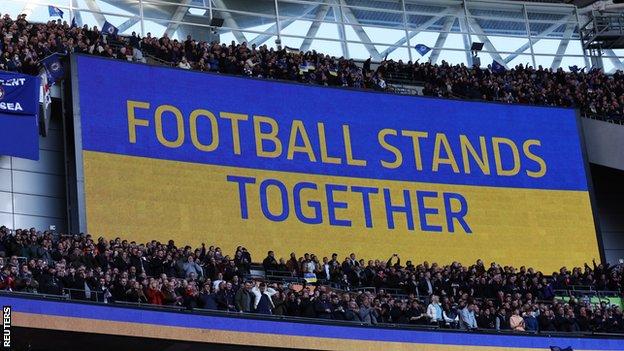 The impacts of Russia’s military invasion of Ukraine have already begun to affect the world of sports, most notably in soccer. The governing body of European soccer, UEFA, and world soccer FIFA have released a joint statement banning all Russian teams from participating in UEFA or FIFA-sanctioned competitions until further notice. The decision comes after the International Olympic Committee suggested that all Russian and Belurusian athletes be banned from international sporting events.

UEFA was originally lenient on Russia, only imposing light sanctions. But as many of the world’s major nations imposed harsher sanctions, UEFA came under scrutiny for not doing more. So, in response, UEFA made the decision to relocate this year’s Champions League final. The final was originally scheduled to be held at the GAZPROM Arena in St. Petersburg, Russia, but a decision on Feb. 25 will relocate the event to the Stade de France in Paris. This is a decision that I’m sure we all can agree with as hosting the final of a major sporting event in a country who isn’t just at war, but started the conflict, is a danger to thousands of fans likely to attend and to the players themselves.

But UEFA did not stop there with their sanctions. On February 28, they made the decision to ban all Russian teams from UEFA-sanctioned competitions for this year, while FIFA also removed the Russian national team from the World Cup scheduled later this year. Many countries have also refused to play against Russia in their upcoming games. The Russian national team was scheduled to play Poland on March 24 in a World Cup qualifying match, but Poland has already declared that they will refuse to play. Other countries, such as the Czech Republic and Sweden, have also refused to play against Russia.

Many feel that the decision to ban Russian teams is a harsh one considering many Russian athletes had nothing to do with their country’s decision to invade Ukraine.  The Russian Football Union (RFU) has responded to these sanctions by saying they “categorically disagree” with the allegations and could appeal the sanctions in the coming weeks.

However, in my opinion, there wasn’t really much else that could be done. Despite the fact that many Russian athletes have come out publicly expressing their concerns for the people of Ukraine and their disapproval of the actions of the Russian government, this isn’t a situation that can just be looked past like nothing happened. One of the many downsides of an autocratic government is the decision of one person can affect the lives of millions. The only thing that we can do now is hope this war is put to an end sooner rather than later.