How Should the U.S. Handle Russia? It’s Complicated. 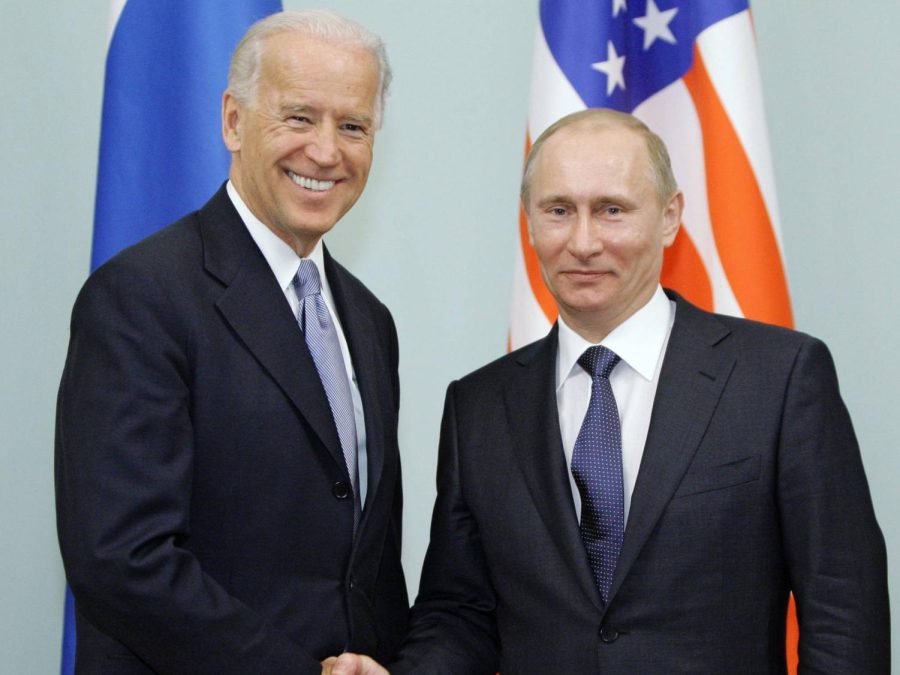 By now you have seen the headlines and news stories. Russia has officially invaded Ukraine, setting off the biggest military conflict in Europe since World War II. After months of stacking troops along the Russia-Ukraine border, Putin finally decided to invade the nation that was once a prominent Soviet satellite state, and violence and death has quickly ensued. Many Ukrainians are afraid about what will happen next, and countries around the world are rallying behind the nation as they undergo a fight for their sovereignty and independence.

One of those nations that has stood up for Ukraine and their sovereignty is the United States. President Joe Biden was quick to condemn the Russian attacks on Ukraine, and Biden has held firm in his disapproval for Putin and his actions. Biden’s rhetoric regarding Russia and Putin has differed dramatically from that of his predecessor. Former president Donald Trump frequently talked about his positive relationship with Putin, and he reiterated the fact that in order for the two superpowers to get along, it was important for him to have a good business relationship with Putin.

Biden has been much less forgiving towards the Russian president, and he made it clear before he even entered office that he would not pander to Putin and Russia the way he thought the Trump administration did.

But following Russia’s invasion of Ukraine, questions and criticisms regarding Trump’s relationship with Putin need to be reexamined at best and thrown out the window at worst. If Trump and his administration sucked up to Putin the way that Biden and many democrats claimed, why did they not invade Ukraine while Trump was in office for four years? It’s obvious that the invasion of Ukraine has long been on the mind of Putin and other Russian oligarchs. In fact, Russia’s invasion of their southwest neighbors began in 2014, while the Obama administration was still holding office.

This is not to say that the only reason Russia invaded Ukraine was because Biden is in the White House as opposed to Trump, but the timing of the invasion certainly begs the question of whether Putin was more willing to go through with the invasion with Biden in office. Even though Biden has consistently called Putin an “evil man” and condemned his invasion of Ukraine, it does not seem like Putin is all that scared of Biden and the U.S. at the moment.

Biden and other democrats have been extra reluctant to work with the Russians following the alleged Russian interference in the 2016 U.S. presidential election. On top of that, over recent years, views on Russia have become more different and extreme based on party affiliation. It has been said that Moscow has made an effort over the past several decades to win over some right-leaning conservatives in the U.S. with their conservative views on gay marriage and other political issues. While you could probably make the argument that in the U.S. a conservative is more likely to be sympathetic towards Russia than a liberal, it’s important to state that Russia has not really won any supporters since Putin has been in charge.

Americans are well-aware of the human rights violations that have occurred in Russia, and it is well-known that Russians lack a sense of individual freedom and expression due to the dictatorship in place. Unless you’re a fan of oppressive regimes and dictators that have their political opponents threatened and killed, you’re not siding with Russia.

But that does not necessarily mean that business with Russia can’t be done, or a relationship with Putin can’t be held. I know a lot of people may not be willing to believe this, but you can still have a business relationship with somebody that you dislike or somebody who you know is evil. By having a positive relationship with that evil person, there could be millions of people who benefit from the increased safety.

One thing that would benefit both conservatives and liberals is to realize that there are different forms of effective foreign policy and diplomacy with foreign leaders. Former president Ronald Regan was widely known and praised for his firm and stubborn approach towards Russia. Many would say that Reagan’s upfront and honest approach with Russia helped put an end to the Cold War, or even the Soviet Union entirely. But just because Reagan’s “no nonsense” attitude worked with Russia does not mean that there aren’t other ways to effectively work with the country.

The United States’ problems with Russia are not going away anytime soon, as Putin looks poised to continue his invasion further into Ukraine as time goes on. Issues with Russia are nothing new to the U.S., as the two countries have been at odds since the beginning of the Cold War, which ensued in the immediate aftermath of World War II. The American people factor in a president’s views towards Moscow and Putin when deciding who to vote for in the presidential election, and we have just witnessed the impeachment of a president based on allegations of Russian interference in his presidential election victory.

This is all to emphasize how important the United States’ relationship with Russia really is, and the importance of electing a leader who knows how to deal with Putin. Whether Joe Biden is that guy remains to be seen, but he’s not off to a very good start. Say what you want about President Trump, but there’s a reason why Putin did not attempt an invasion while Trump was in office.

Depending on Russia’s next move, it’s possible that Putin could leave Biden and other democratic leaders with no choice but to come down hard on the country. Sanctions have already been announced by Biden and other European leaders; but with the amount of hidden wealth that Putin and other Russian oligarchs are suspected to have, there are questions as to how effective those sanctions will be.

The question is how far Biden and other world leaders are willing to go to punish Russia for their actions. Obviously nobody wants to set off a worldwide nuclear war, but the foot needs to come down at some point. If Putin is allowed to invade Ukraine while going unpunished, what else might he be willing to do? Lack of serious punishment towards Russia would not only encourage Putin, but it could also cause China to start thinking it could get away with an invasion of Taiwan.

This means that the precedent needs to be set early and firmly from world leaders across the globe, including U.S. President Biden. The U.S. and other NATO nations will not stand for the complete lack of respect Russia has shown towards Ukraine’s sovereignty. Right now, Putin and Russia feel as if they have successfully launched their invasion while going relatively unpunished. But that fact can not sit well with the leaders of the free world.

The question now is what’s next? Nobody has all the solutions to this very delicate and complicated issue, but that does not mean the U.S. and other nations can not try their best to come to a peaceful solution. Russia’s invasion of Ukraine has made this time period extremely important towards protecting the national security of the U.S. Will the U.S. stand up for the free world and ensure safety for its citizens in this time of crisis?

The floor is yours, Joe Biden.