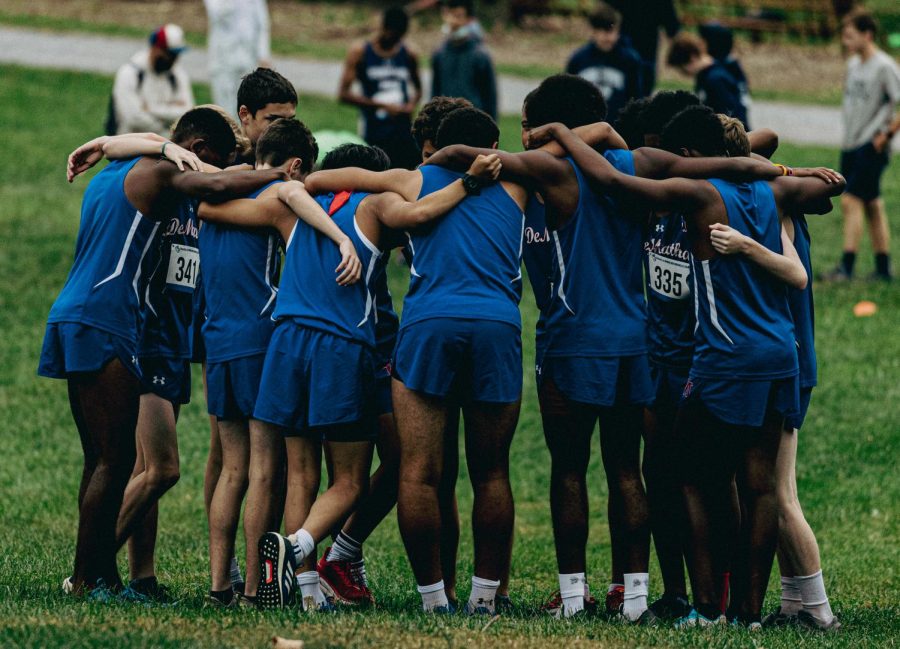 The team huddles before a race during the 2021 season. (Photo credit: Jaylee Photography)

Sports are an integral part of life at DeMatha. Students balance academics, athletics, and many other extracurriculars during their time here. As with many other sports, the cross country team has a rigorous practice program for their athletes over the summer to prepare them for the coming season. Especially with a sport like cross country, where regular and consistent practice is needed to succeed, the summer offseason is one of the most important parts of the year.

Rising senior Ian Parsons is taking extremely serious steps to prepare, as he plans on “stepping out my front door” along with taking the rest of the following steps on his runs. “In all seriousness,” Parsons says, “I intend on coming to every summer workout and doing all of my other workouts,” a continuation of his dedication to the cross country team. Rising sophomore William Jackson plans on growing into a greater role on the team, as the team needs “motivation and confidence” to improve.

The stretching and general strength workouts play a large part in getting athletes body’s ready to withstand the strain running puts on, and co-captain Michael Metz plans on emphasizing their role. “I think they are a big part of making us successful,” Metz commented.

Cross country is a sport in which individuals can improve themselves regardless of their natural talent levels, and the summer offseason is meant to assist that. Jackson plans on improving many aspects of his game, starting with his diet, “whether it’s three apples a day” or increasing his water intake. “Another thing to improve on is to complete the workout/exercise…to the total completeness.”

With Metz, he plans to work on his personal discipline, and he thinks being co-captain will aid this tremendously. Stretching is one of the areas where Parsons plans to improve, as he “hasn’t always been the best about them in the past.” Even though he feels that he doesn’t have to stretch more, he wants to do his part to contribute to the team’s success.

Especially over the summer, where many athletes are free to do as they please, motivation may be hard to get to complete practices. Running is a sport that requires mental fortitude as much as physical fortitude. As captain, Metz wants the team to be running as efficiently as possible, and that includes mental readiness. “I want us all to be friends as well as teammates,” Metz says, so the entire team can be ready for the season. “I want us all to buy in this year.”

Parsons believes that setting a sort of routine can help with finishing the summer workouts, and recommends hanging up a list of the necessary workouts to keep it in mind. Motivation is a key part to winning in cross country, and Jackson thinks that setting a goal to beat a certain goal or person could help in making great strides (no pun intended). “If you have a goal in mind to be better than someone else, train to beat them, don’t train as if you’re better,” and he adds that hydrating will help to keep athletes functioning in the hot weather.

All the preparation in the world would be for nothing if each runner isn’t truly committed to being the best they can be. Hopefully for the team, which has a good shot at winning WCAC championships next fall, they will be able to achieve it.

There will be an interest meeting Wednesday, May 25 at 6:30 p.m. in Room 7302 of the Convocation Center. All returning and prospective runners are encouraged to attend.

Maximo Legaspi is a co-captain for the cross country team this year.