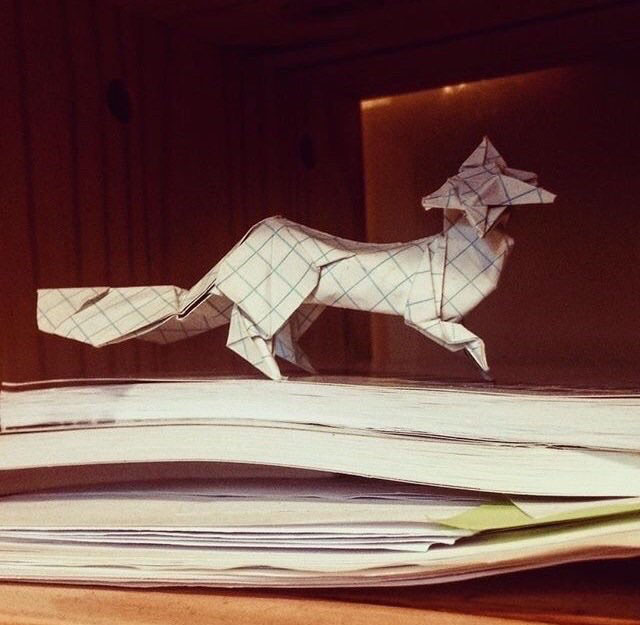 An origami fox by Tan Vu.

Junior Tan Vu came from Vietnam into the United States two years ago for a better education. Currently, he is living with his uncle in D.C. Over the past two years in America, he picked up an interest in origami.

Originating from China and popularized in Japan, origami is the art of paper folding. The skilled folding leads to intricate designs, most commonly creating animals and plants.

Actually, Tan started doing origami because he was bored. “When I came here, I was bored. One day, I watched a YouTube instructional video of a guy doing origami and I thought I should start doing that too. Now, after two years, I have gotten much better.” The first origami structure he made was a sailboat; now he is making more difficult structures like foxes and birds.

He still does origami pretty often, even when he is not necessarily bored. “I try to do it as much as I can, especially when I’m at home. I work on them once or twice a day; I usually sit for 30 minutes to two hours, sometimes even more, but I try to finish them if I have time.” The making of origami structures takes quite a long time to complete, however. “For me, it usually takes one or two days just to fold.”

Out of all the origami structures he has made, his favorite is the Kusudama. “I like all of them, but if I had to choose, it would be the Kusudama.” According to Wikipedia, Kusudama originates from ancient Japanese culture, where they were used it for incense and potpourri; possibly originally being actual bunches of flowers or herbs.

Tan believes he loves doing origami because it is fun and can be like a meditation. “I just love doing it so much. The repetition of doing something over a thousand times is fun for me. Also, with all of the repetition, there comes a time when you don’t need to think about anything else, you just do it.”

His ultimate goal with his origami skills is to make a career out of it, even though he is very aware of the uncertainty of that profession. “I want to design models and special structures. Maybe even Jesus or something. Though, I do know the career path of art is unsure since there is a slim possibility of being truly successful.”

Since Tan hopes for a profession in origami, he knows that math is a crucial part of the art. “When I fold with diagrams, math doesn’t play a big role. However, when folding with crease-patterns, math is basically the only way to help solving the origami.”

As for his position in attaining success in the origami/design industry, he believes it is possible with determination and a strong work-ethic. “If you’re good and dedicated enough, you can find a career in anything. I think I’m a little dedicated, but far from good enough, so I do not think I will make a career in origami.” Tan Vu continues to practice the art of origami whenever he has time.