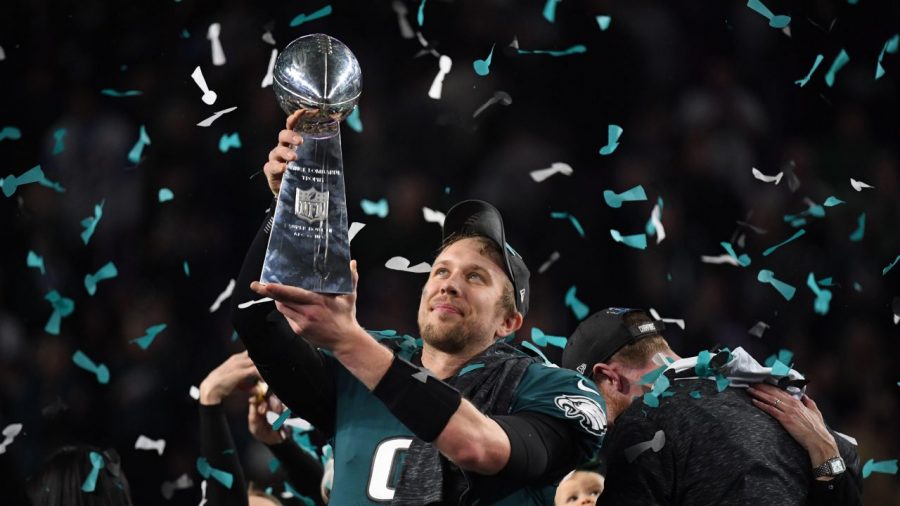 As the ball went spiraling through the air, it was batted down and hit the ground with the game clock reading 0:00. Green and white confetti rained down on the stadium as Tom Brady and the Patriots hung their heads in disappointment that they could not secure back to back Super Bowls. The Philadelphia Eagles rejoiced as they captured their first Super Bowl since 1960, bolstered by a great performance by backup QB Nick Foles and and all around great Eagles offense that put up 41 points.

Tom Brady by no means played a bad game. He threw for over 500 yards with three touchdowns and no interceptions, but a fumble on what would have been the game winning drive sealed the Patriots fate. He then got one more shot, but the last second hail mary attempt was batted down in the end zone. After the game Brady was quoted saying  “I mean, losing sucks. But you show up and you try to win and sometimes you lose and that’s the way it goes.”

The Patriots started out the first half shaky, mainly settling for field goals once they got into the red zone. Stephen Gostkowski missed an extra point and a 26 yard field goal. The Eagles offense scored more touchdowns early, but also had some kicking woes, leading to them putting in rookie kicker Jake Elliot, who broke the Super Bowl record for longest kick made by a rookie when he nailed a 46 yarder.

The Patriots came alive in the second half, with Brady targeting Gronkowski 5 times on the opening second half drive, and completing four of those passes including a touchdown. But the Patriots defense was lackluster, missing numerous tackles and essentially being an open door that

Nick Foles took advantage of, slicing them up for 373 yards and three touchdowns, with only one interception. Foles also caught a touchdown pass on a fourth and one reverse play on the goal line, one of the biggest highlights of the game.

Justin Timberlake performed a medley of his greatest hits at halftime, including a controversial duet with a projection of the late Prince, a Minneapolis hero who famously disliked Timberlake when he was alive, and specifically requested that when he died, people did not try to reincarnate him and thus ruin his legacy.

Nick Foles was the MVP of the game, and is now the second quarterback to beat Tom Brady.