My Trip to Germany 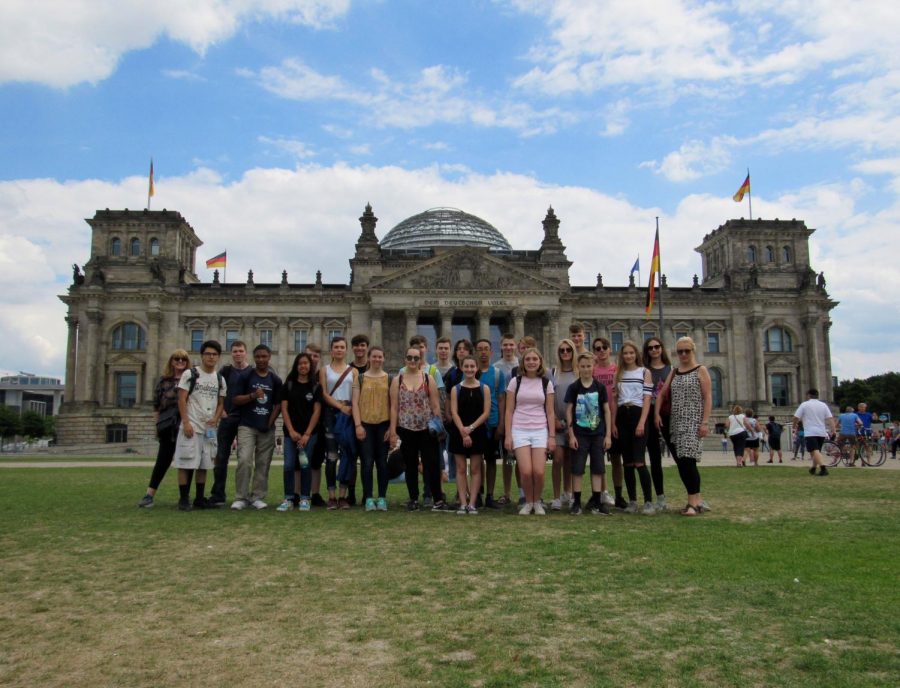 A group of Americans traveled from Atlanta, Georgia to Berlin, Germany in early June through the American Association of Teachers of German (AATG) program. I was one of them. I did not know anybody on the trip, especially since all of us came from different states including Pennsylvania, Virginia, Georgia, California, Tennessee, and Illinois. I represented Maryland.

After we arrived at the Berlin airport, we took a long bus drive down to Leipzig. I remember on the ride that I noticed several luxury cars such as Mercedes Benz, BMW, and Audi on the road. I was also amazed at the beauty of the country. I eventually fell asleep in the bus from the jetlag. When I woke up, we were already in Leipzig and close to the destination of arrival.  At a local park there, my host family awaited me for my arrival. At this point, I was very excited and extremely nervous. All of the sudden fears invaded my mind. How will the Germans be? Would I be welcomed there? Is my German good enough?

I eventually met my host family and we had an introductory conversation. My host brother Marian and mother made sure everything was fine and that I was ok.  Later, we walked down the city and entered the central train station to wait for my host sister. She eventually arrived and we all went home together.

I settled in pretty fine. I had my own room with my own computer and my own German phone. We sat in the kitchen getting to know each other. My German family was very curious to learn more about me and my country. I told them about my background and my life in the United States. I also was very eager to learn more about my host family and the Germans in general. Our conversation lasted for several hours.

During the first week of my trip, I was getting accustomed to Germany. I learned my way home and I learned how to take the public transportation such as buses, trains, and trams. My host brother helped me get comfortable and acclimated to the culture and lifestyle. We went downtown in Leipzig and visited important landmarks, monuments, and churches. We even went to the cinema to watch Deadpool 2 dubbed in German.

I went to school during the weekdays at the Wilhelm Ostwald Gymnasium. Along with my fellow Americans, I attended German classes. We studied a little grammar and practiced our German with the American chaperone Frau Lorinskas and the German teacher. Additionally, we joined our hosts in their classes. Even though everything was in German, I was able to understand what was going on. Not only was I happy that I was improving my German in school, but I was glad to have made many German friends from there including Yannik, Johannes, Jankarl, Jan, Ariz, Julius, Bruno, Christoph, Elias, and Wilko.

After school I went into the city with my host, my new German friends, and my fellow Americans. As I got to spend more time with the other Americans, I became friends with them especially with Karl, Lance, and Evan. We went to stores, shops, and restaurants. We also had good times at the park by the Sachsen bridge. Everyone would come together to watch the World Cup games outside in the park where there was a big TV screen broadcasting the games live.

I met Croatians along the way. Since they also took part in the German foreign exchange program, we became friends and interacted together. They were also present during our free-time activities after school and on the weekends. Everyone got along perfectly as if we were long-time friends. Nika, Anja, Ema, Tara, Lorena, Martina, Filip, Barbara, Dorotea, Karla, Valentina, and Elena were the only Croatians I have ever met and probably the only Croatians I will ever meet.

In Leipzig, we also visited so many places together as a group. We had a fun time at the Leipzig Zoo. I got to see so many cool animals while simultaneously enjoying the day with my German and American friends. In addition, we even visited the United States Consulate in Leipzig. We had to pass through security to get through, but it was neat to visit the government building as an American. We got a chance to tour the town hall as well as the Leipzig University in the city.

Throughout the trip we went on several excursions to other great cities. On my birthday on June 16, we visited Berlin for the day. It was especially touching to me that I woke up to birthday cake for breakfast, a happy birthday song from Germans and Americans, and a gift from the German teacher Frau Schreiber. I was lucky enough to see the east side of the Berlin Wall, the Brandenburg Gate, the Reichstag building, and numerous other wonderful monuments. We also visited the historical city of Weimar. I saw the houses of famous German poets Goethe and Schiller. Another city we visited was Dresden. I saw the reconstructed buildings and structures from the Second World War bombings. In particular, the Dresden Frauenkirche was a remarkable sight to see still existing after the massive destruction.

After having lived in Germany for three weeks, I learned so much about the culture. It became quite obvious to me that the Germans love to eat meat. From the lunches and dinners with my host family to the food on the streets and in restaurants, bratwurst was a very popular food. Additionally, I noticed the transportation system was so efficient. It was more convenient for people to travel by bus, tram, or train than by car. Also, many people instead rode bicycles to get around through the city (including my host mother). I also realized how the Germans were hospitable, welcoming, and friendly (at least to me they were).

On the last day of my adventures, we had a departing celebration. The short-lived friendships made with the Germans, Croatians, and even the Americans had come to an end. It was bittersweet because everyone loved their time in Germany, but the realization that it was over was sad. I said goodbye to my friends and enjoyed my last moments. The following day we went back on the bus to leave for the airport. The Americans took a plane ride back to Atlanta, Georgia where they had all met, and took their memories in Germany with them.

I hope to return to Germany next summer if I have the opportunity!